I believe laughter has the power to connect us. I’ll run into someone and perhaps can’t remember her name or where we met, but I’ll recall that we shared laughter.

It was 2013 and I was in Rome with Malone students on a service-learning trip working with refugees. One student was lightheartedly speaking to a man nick-named Mangal. In the course of small talk they realized that they shared the same birth date — not just the month and day but the year, as well. How remarkable!

Here was this American student, recently graduated from college and engaged, with a whole lifetime of opportunity available to her. Here was the Afghan refugee, born the same day but a world away. Mangal is clearly intelligent with his mastery of multiple languages, but he had little formal education and was now alone in a strange city. To say that this juxtaposition of their situations weighed heavily on the student’s heart is an understatement. 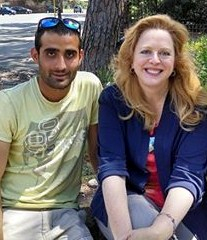 What I’ve learned about refugees in my five trips to Italy is that many just want to be seen. As a homeless person and a stranger in a strange land, it is rare that someone speaks to them, acknowledges them or asks them to tell their story.

When I returned in 2014, I was feeling confident (and rather smug) that I knew how to navigate the city. Then I made a rookie mistake when we boarded a bus back to the church for an evening service project. The further we traveled away from our destination the more upset I became with myself at my stupidity! I stewed and fretted and beat myself up mercilessly.

We had just arrived (an hour late) when I glanced over at a man speaking with one of the missionaries. The man and I briefly made eye contact and I immediately thought, “I’ve shared laughter with him!” I looked back in his direction and he looked at me with a puzzled expression. Almost in unison we said, “I remember you!”

I had spoken to him only for a few hours on one day a full year before. Of the nearly 3 million people living in Rome and the hundreds of thousands of tourists and refugees there, we were at the same place at the same exact moment.

Mangal immediately asked about the students who had been at our table, whether the one was married now and if the other still played rugby. How did he remember this brief interaction so vividly, so detailed? Was it because of the laughter? Did we help him feel seen and valued?

If we had been on time that evening, our team would have finished our service project and left before Mangal had arrived. So while my navigation error was extremely frustrating, God intended the situation for good. Why did I spend hours beating myself up over my mistake when I know God’s timing is perfect?

Our highly improbable and serendipitous second meeting reminded me that God can use even my mistakes for good and that I serve an awesome God.

I was reminded of a verse in 2 Corinthians 12: “My grace is sufficient for you, for my power is made perfect in weakness.” So I took a deep breath, recognized that I clearly needed this reminder, as well as a lesson in humility, and I thanked the all-knowing God of grace.

YOU are a part of this team!! Join us beneath the library (CL46) Monday morning to learn more! If you are interested in writing articles for us, come at 10:05am. If you are interested in taking photographs for the articles, come at 10:30. See you there!
happening TOMORROW! We would love to see you stop by our table to learn about how YOU can get connected this school year!
‼️Hey Malone‼️
Despite all that the last year has thrown their way, the graduating classes of '20 and '21 will be honored at this year's in-person commencement ceremony at Tom Benson Hall of Fame Stadium.
Starting in the 2021-2022 school year, the Alumni Mentorship program will commence, in line with the Pendle Hill Pledge.
Finals week is right around the corner! Where is your favorite place to study?